Clairvoyance & ESP in the Wiccan Faith

Today, we will explore one of the more complex topics amongst Magickal Practitioners:  Clairvoyance and Extra Sensory Perception (ESP).  For most people,  it takes a great deal of focus and experience to attain a minimal level of these traits, and, while others are predisposed to this type of skill, one may start practicing at any point – including today.
Wicca holds that the transformation into an altered state of consciousness, in order to reach the divine, can be achieved by each and every individual regardless of natural abilities.  With that said, some individuals do require less training and practice than others.  Much like joining a Coven where ancestral lineage may play a large role in initiation, an individual might possess an inherent capacity for the discipline of the mind.  This may be a result of genetic traits, or it could simply be a characteristic unique to the individual apart from heredity.
A Wiccan practitioner will likely require many tools when performing ceremonial Magick.  Each of the numerous methods of divination require some external item such as a fire, an animal, a crystal ball, a human palm, as well as various other objects.  In addition, depending upon the personalized approach toward Magick, the individual might utilize a Caduceus (wand), Arcana (Tarot Cards), a white-handled knife, an athame (ceremonial dagger), and perhaps any of the various plants and stones that possess Magickal properties.  While this is the most common approach, there are others who need only their mind.
Clairvoyance and ESP, or Extra-Sensory Perception, are fundamentally what practitioners of Natural Magick seek to achieve without the use of any external sources.  These means of foresight are regarded as highly controversial as the idea of one possessing this ability as inherent would seem to imply supernatural or paranormal abilities.  Nonetheless, there are individuals who claim to be clairvoyant or possess ESP.
Extra-sensory perception is generally the umbrella term, with clairvoyance as 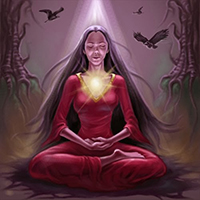 the premier category.  The terms describe the ability to see events without any of the five senses.  ESP is essentially the sixth sense, or the third eye that allows an individual to go about their daily business with foreknowledge.  No preparation or special location is required, and in one sense, the clairvoyant individual could be considered perpetually connected to the divine, though this idea is still up for debate.  Additionally, many clairvoyants have said that while their natural ability has given them a great edge, an individual without this inherent capacity can also possesses the abilities.
If you have any questions about Clairvoyance or ESP, do not hesitate to ask.