History of the Tarot

Posted by Eugenie LaCroix on 5/8/2016 to Occult Weekly
The Tarot holds a particular allure for many, and is one of the most popular practices utilized 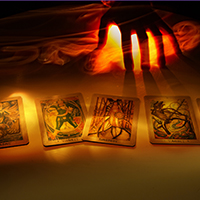 in determining events pertaining to an individuals past, present and future.
Originally, popular theory credited the Romany people with the creation of Tarot cards and their introduction into society, preceding regular playing cards. However, further studies have proven that Tarot cards were present in Italy and ancient Egypt centuries before being utilized by the Romany to tell fortunes.
The exact origin of the Tarot is unknown, though several theories persist to this day. A French theologian by the name of Antoine Court de Gébelin believes that the Tarot were originally part of the Book of Thoth, an ancient Egyptian book of divine wisdom. Another theorist, Eliphas Lévi, believes that the Tarot is related to the paths to stages of consciousness described in the Qabalah. Additional studies have also found that the Tarot correlates with the Hebrew Alphabet.
The Tarot itself is divided into two specific sections: The Major Arcana and the Minor Arcana. The Minor Arcana is made up of four suits. These suits may vary, as there are many variations of Tarot decks, but typically they are swords, pentacles, cups, and wands (or staves). Each suit numbers 1 through 10, and also include a King, Queen, Knight and a Page. Again, some of these names might vary from deck to deck.
The Major Arcana is made up of 21 additional cards, each card depicting a figure, figures, or a symbol. These include The Sun, The Hanged Man, The Hermit, The Empress, The Lovers, and The Wheel of Fortune, to name a few.
The most popular and well known of the many varieties of Tarot decks is the “Rider” deck, created by A. E. Waite, a member of the Hermetic Order of the Golden Dawn. This order was comprised of magicians who believed that the 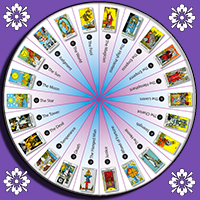 cards of the Major Arcana symbolized pathways into the mind, related to the tree of life.
Using the Tarot cards as a means of divination has become somewhat of a standard practice amongst would-be “psychics”, somewhat diminishing the seriousness of the practice. In fact, Tarot readings have become an opportunistic business throughout the nation.
However, only a practiced individual with years of experience and an innate talent for mastery of the Tarot can truly understand and accurately interpret the cards drawn for any particular reading. Because each card drawn is relative to one another, and all the cards drawn are relative to the individual who has drawn them, each reading is unique. Divining the meanings of the cards is an ancient tradition, and a professional Tarot reading should never be considered lightly.