Posted by Stephanie Crowe on 6/7/2015 to Occult Weekly 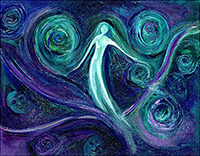 In the pharmaceutical epoch this day and age, if you have trouble sleeping, a trip to a medical professional can often solve the problem.  Depending upon the issue at hand, you might be diagnosed with Insomnia, Narcolepsy, Obstructive Sleep Apnea, Somnambulism, Cataplexy, Parasomnia, Sleep Paralysis, or one of the many other sleep-related disorders.  In most cases, the doctor is able to write down a complex word on a piece of paper, which enables you to get proper medication from the pharmacy to relieve yourself of this sleep burden.  However, this was not always the case.  Diagnoses for sleep-related problems throughout history have been religious in nature, often related to the supernatural.  I can certainly take the doctor’s word that this pill in my hand will generate the necessary chemicals to overcome the cerebral dysfunction causing this disorder.  Alternatively, I can choose to think that this pill protects me from all Incubi, the nefarious demons of the night.
One of the first conclusions regarding a sleep disorder was that a demon imposed itself upon the sleeping individual, causing the difficulty – whether it be excess noises, inability to stay asleep, paralysis, pain, or terror.  At first these demons were thought to have been of different genders.  The male demons, or Incubi (singular Incubus), would prey upon females, while the female demons, or Succubi (singular Succubus) would victimize sleeping males.  They were said to be strictly heterosexual.  The terms Incubus and Succubus are derived from Latin, though these demons have been known by many different names depending upon the region.
In legend, when an individual was asleep an Incubus or Succubus (depending upon the individual’s gender) would take human form and have sexual intercourse with the person or perhaps just sit upon their chest.  Thus, when an individual complained of chest problems, nightmares, the sensation of paralysis, nocturnal emissions, or a similar condition while asleep, most people of the time deemed this to be a result of a demonic visit.  It was also believed that if an individual did not take precautionary measures and an Incubus or Succubus regularly called upon the same person, it would result in serious deterioration of health, or even death.
What precautionary measures could be taken?  According to Kramer’s Malleus Maleficarum, there existed five such ways in which a person could expel a nocturnal demon.  They could exorcise the demon when inside of the individual, perform Sacramental Confession, Sign of the Cross (or recite the Angelic Salutation), they could move away, or ask to be excommunicated.  Today, the solutions to the problems of the Incubi and Succubi are usually found within the medical field.
The concept of these nocturnal demons has been present since the first civilization.  Found within the Sumerian King List of ancient Mesopotamia is the first references to the idea.  Gilgamesh’s father, Lilu, is an Incubus, affecting the sleep of others, as is

Lilitu a female Succubus.  The problem only grew from here.  Around the fourth century A.D. St. Hippo of Augustine declared in his De Civitue Dei that the Incubi problem was much too large to ignore.  Around 1136 A.D. Geoffrey of Monmouth wrote in his Historia Regum Britanniae that Merlin, the great wizard, was begat by a king’s daughter and an Incubus.  This added the idea that these demons could reproduce through humans.  Furthermore, Sir Thomas Aquinas stated that demons did not have a true gender, but rather could take any form in which they please.  From the dawn of man until recent times, there was great fear of Incubi and Succubi, though this long phase has seemed to come to an end.  Do you think that this is because humanity has eradicated these demon attacks, or are they just known by another name?