Technology and the Craft

There is no denying that we live in a digital age, where technology is changing and improving by the minute. The invention of the motion picture is only a century old, the television a half century, and the personal computer even more recent. Yet look how far most of society has come in such a short time as a result of the great engineering minds who have thought outside of the box and provided the impetus for a more convenient lifestyle and a more connected world. Nearly every person in this modern age carries around some form of personal gadget – whether it is a smart phone, an iPad, or some other new invention that has just been mass produced.
These inventions have created a more compressed, globalized world, where we can hear about news from across the globe instantaneously, but it also has drastically changed theories of professions and economics in general. Corporations have grown larger, and seek to utilize this new technology to gain an advantage on their competitors. Certain occupations, such as bank tellers and radio DJs, unfortunately seem on the brink of wholly becoming replaced by machines, and therefore obsolete. The door-to-door milkman became all but extinct years ago.
For those of us who have gained expertise in a certain field, it is necessary to adapt our trade so that it will survive this digital age. Some may consider this unfortunate, others may be excited about the future, but either way it seems to be a fact of life that nearly all occupations must change. Even those very old trades that have changed very little in millennia prior to this century must find a way to persist. This includes Practitioners of the Craft.
How is the Craft adapting to the digital age? The most obvious change is this right here - the operation of the internet as a means to communicate with others. You may be from Asia, Europe, Africa, Oceania, or the Americas, yet here we are all able to discuss Occultist or other topics and give our opinions about certain issues – all at the 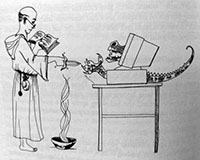 click of the mouse.
Beyond communicating through internet the Craft has changed in many ways. For one, astronomy has become a precise science, where we no longer need to calculate the exact moment of an eclipse (though we generally prefer to) or the passing of a comet. Meteorology, though not yet as precise as astronomy, allows us to better predict weather conditions on the day of a Sabbat or otherwise.

otis dixson
do it work, just want 2 no
cindie53
yes these spells do work it might not be 100% right awat what u asked for BUT it would still be regarding the same subject