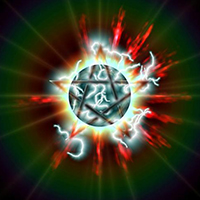 According to the Ancient Greeks, the universe is made of four elements – Earth, Air, Fire and Water – and the non-material world by Spirit (also called ether). Spellcasters call on these elements to help them with their Magick. The notion persists, not just in Spellcasting, but also as part of everyday culture in countries such as China and Japan, and it was central in the beliefs of Native Americans and the Celts.
Spirit, the most esoteric of the elements, is perceived as an energy that is the driving force behind creation. It is the element without which the others could not exist, but is not always itself considered an element.
Air is yellow and its direction is East. It is associated with communication, education, the intellect, wind and sound. Its zodiac signs are Aquarius, Libra, and Gemini. Air is exciting. It values anything new and untried, always keen to learn the new.
Fire is red, its direction South. It represents passion and the desire that burns inside all of us – strongly in some, less so in others. It is the most physical of all the elements and is linked with courage and feelings, as well as being the element of change. Fire encourages risk and recklessness; once it has started it goes on until it has burned itself out. Aries, Leo and Sagittarius are the fire signs.
Earth is green and its direction is North. Associated with beauty, growth and nurturing abundance, it also represents prosperity, wisdom and sensation. Earth is the element of our physical bodies, of our flesh and bones. It has qualities of steadfastness and dependability, endurance and protection. In the zodiac, Taurus, Virgo and Capricorn are all Earth signs.
Water, blue in color and West in direction, has associations of psychic energy, emotion, intuition and the subconscious. Fluid, accepting and tolerant, water overcomes difficulties by flowing around them rather than confronting them, but it also has the power of erosion and the power to overcome all things. Those born under the water signs – Scorpio, Cancer and Pisces – share an insight into the ways of others and the ability to feel their joys and pains.
The elements are summoned to attend Rituals. They can be summoned to stand

outside and guard the circle, or as witness to Rituals and Spells to be Cast. It is not always necessary to summon all the elements: a Spellcaster weaving Magick concerned with issues of sex, love or transformation may only summon Fire. If emotional and adaptability matters were concerned, Water would be summoned. Earth is called upon for its stability and potential for encouraging growth and birth, Air for Magick concerning commitment or ideas.
Previous Post
Next Post

Hi Monique! Thanks for the beautiful article to remind us of all the fabulous energy out in the Universe. Daurice

This is really well written for lay people. Thanks!

My earth sign is Taurus even though I haue the power of air that is stronger and in control. Has this happened for many others?

That was very interesting and well done. Thanks

Very interesting. I want to read them all

The Elements are real indeed. Many thanks for beautiful esoterical articles. Remain blessed by all the forces of nature please!