Who Was Old Dorothy Clutterbuck?

around the turn of the 20th Century. She was born in Bengal, India in 1880 to a British Army Officer and his wife. She moved to Hampshire, England with her family upon her family's retirement, and lived a comfortable lifestyle organizing charities for children and living amongst the affluent. Later in her life, Clutterbuck married a Justice of the Peace, with whom she lived for about twenty years.
So why are we dedicating today's newsletter to Old Dorothy Clutterbuck? Is there something here worth mentioning that relates to our life's work in Wicca and the Occult? There are two competing themes that often surface when discussing the Craft throughout history. The first are those individuals who defeated the odds, making major developments in the study and practice of Witchcraft - not to mention helping to politicize a movement for religious freedom. The other is the persecution of all Practitioners of Magick in every epoch of man. But what about those Practitioners cunning and wise enough to know that their efforts would be thwarted by the social order if their true spiritual beliefs became well known yet whose convictions were strong enough that they continued to practice and support their faith.
In other words, what about the Witches and Wiccans and other Neopagans who remained underground for the betterment of the faith, in order to transmit information and keep the rituals alive even in the darkest hour? Where can we find the names of these individuals in the history books? The truth is, information about these brave individuals is very rare. But uncovering the truth about certain people like Old Dorothy Clutterbuck, seemingly ordinary in their routine lives, can help exemplify the contribution that these people made to the Craft.
The Life of Dorothy Clutterbuck
Though much remains unknown about Clutterbuck, especially concerning whether she belonged to a long line of underground Practitioners, claiming to be Anglicans, or whether Dorothy followed her own belief system. Nonetheless, when her father died, Dorothy inherited a great deal of money and furthered her studies in the Craft and other Occult-related topics. She inherited some land, and bought some more in and around Hampshire and Bedfordshire, all-the-while keeping the going-ons at her estates very secretive.
In fact, Old Dorothy had a way of seemingly assimilating with societal norms while maintaining her ulterior motives. For example, there are two events that occurred at her place that have been publicized. The first was a children's nursery workshop, where Clutterbuck and some fellow Practitioners taught the children about the Magickal property of plants. The second was a charity festivity held for special needs children, where Dorothy was allegedly seeking out gifted children from the group.
Gerald Gardner & the New Forest Coven
A third, more controversial event was held at Old Dorothy's home. She had met Gerald Gardner in the mid-1930's at the Fellowship of Crotona's Rosicrucian Theatre. 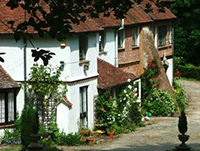 Then in 1939, as Gardner has asserted, Old Dorothy Clutterbuck, as the Head Priestess, initiated him Sky Clad into the New Forest Coven, an ancient hereditary Coven that outlasted nearly every other. It was on this day, in the presence of Old Dorothy that Gardner came up with the title "Wicca." From this day forth, Clutterbuck patronized Gardner's movement through her inheritance, and encouraged him to write books on the subject of the Craft. However, she emphasized the importance of writing fiction to begin in order to maintain the secrecy of the Practitioners' identities as the rest of society was becoming accustomed to this new spiritual worldview.
Others who claim to have knowledge of the situation say that this information is false. They say that the High Priestess of the New Forest Coven was an individual named Dafo, and that it was Edith Woodford-Grimes who initiated him. They say that Old Dorothy Clutterbuck was just a figment of Gardner's imagination. Doreen Valiente had done research to prove the existence of Clutterbuck, but the naysayers still say that she was just an ordinary upper-class woman and deny her involvement in the Wiccan movement.
Previous Post
Next Post

i love witchcraft and want to pracrice how can i b initiated?

This was very interesting. I myself often feel like I have to go 'underground' even though we supposedly live in a more enlightened age. I wouldn't be surprised to learn that the name Dorothy Clutterbuck was made up to hide the real identity of another individual who funded (hence buck) the Wiccan movement.

This is an awesome story. It shows the value of silence due to knowing that being in the public eye has the potential of damaging and ultimately destroying a great work in progress. I applaud Old Dorthy and to her example I say "well done and thank you for your life and example."

ALTHOUGH WE TEND TO LIVE UNDERGROUND LIGHT ALWAYS SCANS EVERYTHING. WICCA IS A MOVEMENT OF CORRECTION WHICH SHOULDN'T BE UNDERESTIMATED.

Thank you once again for enlightening us with this very interesting information. The more we learn about our Craft, the more empowered we become.

Had a very strange experience. I was born 12-1-'51 in Belgium but since my childhood I dream in English. At a certain moment a medium told me there was an old lady standing behind me. We were not related but one day I would see her picture and recognize her. I became interested in Wiccan and pagan things and now it's the best part of my life...and helped me through a great deal of troubles.