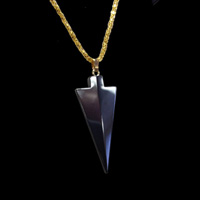 Certain Magickal arts demand a very specialized set of skills. Haitian Vodou, or Voodoo, is one of these arts. Jean-Baptiste Sylvestre brings his knowledge and skill as a Vodou Houngan to the 7witches Coven.

At the tender age of five, Jean-Baptiste had the unfortunate experience of losing both parents within a calendar year. It is not uncommon for children to be orphaned in Haiti, but Jean-Baptiste fared better than most. He was taken in by a woman who not only gave him a home, but also developed the skills that would make Jean-Baptiste a Vodou master.

As a young adult, Jean-Baptiste immigrated to the United States and briefly took up residence in New Orleans where he found a cultural acceptance of his abilities. It was on a random stroll through the famed Garden District where he met the second woman who would have a profound influence on his life High Priestess J. Roslyn Antle. In her quest to assemble a Coven with members who possessed different specialties, High Priestess Antle had traveled to the Crescent City to learn more about American Voodoo and recruit someone skilled in the art. Jean-Baptiste exceeded all of her expectations.

Through his proficiency in both Hoodoo and Vodou, Jean-Baptiste is able to invoke the assistance of Ancestral Spirits in order to greatly magnify the potency of his Vodou Spells. He is adept at using the power of Vodou in matters of love and luck, and, as one would expect, Jean-Baptiste is very skilled in curses and curse reversal.

Because of his status as an Elder, Jean-Baptiste is affectionately referred to as "Dr. Sylvestre" by other members of the Coven. He continues to be a mentor for the younger Witches.

In addition to offering all the Spells in our Standard Spells section, Jean-Baptiste Sylvestre specializes in Authentic Vodou Spells, which you can find here.