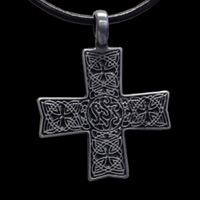 Lynda Stratton's Amulet (shown here) is a very powerful talisman that can be added on to any Spell cast by Lynda Stratton.

Lynda Stratton was born Lynda Ionescu-Stratoni in Romania. Lynda is one of over two million Romanian immigrants who fled the small country during an economic depression in the 1990's.

As a child growing up in a region which was subject to much turmoil, Lynda had few possessions beyond those which were passed down by her Gypsy ancestors. Among these was a diary that belonged to her great-grandmother. Within the yellowed pages Lynda discovered the rich history of her lineage, a history that was steeped in the Sorcery and Witchcraft of the Gypsy people.

With the diary as her primary textbook, Lynda Stratton perfected the art of scrying. Gypsies are renowned fortune-tellers, and Lynda definitely inherited the talents of her ancestors. Perhaps the most fascinating thing to be found in her great-grandmother's diary, however, was a complete method for dealing with the effects of psychic vampirism. In Romania, legends of vampyres are a part of the popular culture. It was not until she read the diary that Lynda began to understand how myth and reality intersect. She learned that vampires are very real indeed, albeit not in the manner that most people have come to understand them.

Paganism lies at the heart of Lynda's Magickal philosophy, but her exposure to the 7witches Coven has enabled her to fuse the modern concepts of Witchcraft with her own knowledge. As a result, she specializes in Spells of Love and Protection. Lynda's background has given her a powerful ability to deal with these matters, and her Vampyre Spells are truly unique among those who practice Witchcraft.

In ritual gatherings of the 7witches Coven, Lynda is often tasked with drawing the circle and invoking the protection of the Guardians of the Watchtowers due to her prowess in visualization.

In addition to offering all the Spells in our Standard Spells section, Lynda Stratton specializes in Ancient Vampyre Spells, which you can find here.