We have previously discussed some of the larger sects within the Wiccan Faith. Two of the largest sects are Gardnerian Wicca, that was which was founded by Gerald Gardner containing relatively strict Coven conventions, Dianic Wicca, stressing feminism and monotheism. However, there is a wide-range of other sects with distinct Wiccan beliefs, including, but not limited to the Algard Tradition, Cochrane’s Craft (and 1734 Tradition), Northern Tradition, Albion Tradition, Ladywood Tradition, Aridian and Arician Traditions, Blue Star Wicca, Church and School of Wicca, Crystal Moon Wicca, New Forest Coven, Temple of the Pagan Way, Ardantane, Green Witchcraft, Cellarius Tradition, Teutonic Wicca, Radical Faery (Feri) Tradition, Georgian Tradition, Heartland Spiritual Alliance, Seax-Wicca, Red Path, Artus Wicca, Wiccan Mysticism, and New Age Wicca. Some of these we have previously discussed, but if you are otherwise interested in a particular sect, please feel free to ask and we can provide you with more information.

However, there is once very large sect that we have not previously discussed. In fact, this Wiccan sect which alongside Gardnerian Wicca, comprises British Traditional Wicca, the largest sect in the Faith. This is known as Alexandrian Wicca.

To best understand the intricacies of Alexandrian Wicca, it is important to appreciate the kind of individual that Alex Sanders, the founder, was. We begin at the beginning.

Born in 1925 as Orrell Carter in Merseyside, Sanders was introduced to the Craft at a very young age. Because his parents struggled with alcoholism, he spent a great deal with his grandmother, an infamous hereditary Practitioner. Legend holds that around the age of seven, Sanders inadvertently walked in on his grandmother practicing Ritual sex, at which time she asked him to enter the Circle and join in. This unusual situation captivated Sanders, who then continued to partake in the Coven’s activities. It is alleged that Sanders was initiated into both the second- and third-degree before his grandmother died in 1940. However, this story has been rebutted by certain people close to Sanders who say that he fabricated these events for his own publicity.

Nonetheless, Sanders pursued a seemingly normal life following the death of his grandmother. He worked at a manufacturing plant, got married, and had children. But all-the-while, he was enhancing his methods of Practice. Then, around the end of World War II, everything in Sanders’ life seemed to spiral downward. His wife discovered his extramarital affairs, he had lost his children and his job. Soon Sanders turned away from improving his techniques and turned toward the Book of Abramelin and using what he had already learned to wreak destruction upon those around him.

But thankfully Sanders did not remain on the Left-Hand Path for long. When he discovered that his sister had terminal cancer, he realized what was truly important. He met a young woman named Maxine, and they directed their energy toward the improvement and promotion of the Wiccan Faith. He soon became the High Priest of a Coven, attracting more and more members to his sister Covens, as well as media attention, and quickly became known as the “King of Witches.” 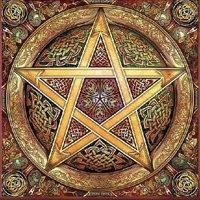 It was not just the publicity that helped gain Sanders notoriety. His Magickal feats are also well documented. He was an expert in channeling, and had many familiars who could show up either spontaneously or on command. Further, it is said that Sanders had the ability to heal warts, addictions, and other ailments. These abilities, and the records in which they were documented led his sect, now called Alexandrian Wicca, to continue to grow.

Sanders died in 1988, but his sect continues to grow to this day. Though he separated from Maxine before his death, they remained good friends, and together with Derek Taylor, documented the Ordine Della Lune of Constantinople to preserve his accomplishments. Some individuals claim that they have communicate with Sanders’ spirit, and asked him about this Order. Do you think that this is possible? What do you think of Sanders’ background, eventually leading him to finding one of the most successful sects of Wicca?