All the true planets experience Retrograde periods, but what exactly does that mean? When a planet is in Retrograde the Energy it carries, causes Earth’s Energy to go into chaos. From Earth the planets appear to move backward, however, this is an illusion as our planet is also moving forward; because of the unpredictability it also sends Earth’s inhabitants into a frenzy, many people like Ready4Retrograde, want to be safe rather than sorry.

Technology and the Craft

There is no denying that we live in a digital age, where technology is changing and improving by the minute. The invention of the motion picture is only a century old, the television a half century, and the personal computer even more recent. Yet look how far most of society has come in such a short time as a result of the great engineering minds who have thought outside of the box and provided the impetus for a more convenient lifestyle and a more connected world. Nearly every person in this modern age carries around some form of personal gadget – whether it is a smart phone, an iPad, or some other new invention that has just been mass produced.
These inventions have created a more compressed, globalized world, where we can hear about news from across the globe instantaneously, but it also has drastically changed theories of professions and economics in general. Corporations have grown larger, and seek to utilize this new technology to gain an advantage on their competitors. Certain occupations, such as bank tellers and radio DJs, unfortunately seem on the brink of wholly becoming replaced by machines, and therefore obsolete. The door-to-door milkman became all but extinct years ago.
For those of us who have gained expertise in a certain field, it is necessary to adapt our trade so that it will survive this digital age. Some may consider this unfortunate, others may be excited about the future, but either way it seems to be a fact of life that nearly all occupations must change. Even those very old trades that have changed very little in millennia prior to this century must find a way to persist. This includes Practitioners of the Craft.
Read More
(2) Comments

Posted by Cormac O'Dwyer on 2/11/2017 to Occult Weekly
With the designated "Day of Love" approaching, the origins of this relatively new holiday appear more ambiguous than most. Truth be told, Saint Valentine's Day, or just Valentine's Day, does not have a significant historical basis, but rather has emerged in the recent epoch, to fill a necessary void.
Many concepts have been associated with Valentine's Day over the previous centuries, including romantic love, hearts, Cupid with his bow and arrow, as well as the exchange of greeting cards and gifts. None of these traditions, however, are very relevant to the original Saint Valentine. In fact, it is difficult for even the most capable 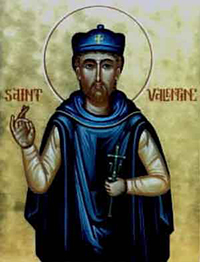 scholar to determine which St. Valentine we celebrate.
There have been various martyrs of Christianity with the name Valentine, three of which are honored on February 14th. The first is Valentine of Rome, a Roman Priest who was martyred in the late 3rd Century A.D., and buried in Dublin, Ireland. The second is Valentine of Terni, who lived around the same time period. It was this Valentine who was executed by the Roman Emperor Claudius II for attempting to convert the Emperor to Christianity, as well as for breaking one of Claudius II laws. There is very little known about the third martyred Valentine, other than that he was martyred and buried in Africa, with many companions.
Read More
(5) Comments

Casters around the globe use various techniques and well-kept secrets to enhance their Magick, Spellwork and to aid in ordinary daily tasks. One common practice is the use of colors. CuriousAboutColors came to us recently seeking advice about just that.