Posted by Eugenie LaCroix on 12/14/2014 to Occult Weekly
Capricorn (Dec 22 – Jan 20)
At the heart of winter, a sign arises that is one of the most recognizable of all of the Zodiac signs. Capricorn is often depicted as a goat suspended in the heavens. 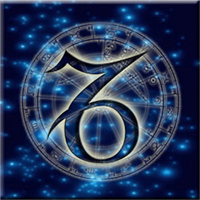 Occasionally, it is also depicted as a goat with the lower body of a fish, though this is a more modern representation with basis in the Sumerian culture.
Capricorn is one of the classical constellations. It was first depicted by the ancient Babylonians, the civilization from whom most of our understandings of the constellations are descended. Greek legend has it that this goat represents Amalthea, who gave milk to Zeus as an infant and kept him alive. It is for this reason the animal was glorified and given a lasting place in the heavens.
The goat has a well-earned reputation for being a stubborn and determined animal. It is often king of the farmyard. However, it is also tough animal that can survive in places where other animals would perish. In this respect, those born under the sign of Capricorn are often understood to be survivors. They have a spiritual toughness about them that serves them well.
Capricorns tend to take themselves and their life’s work quite seriously. They have a sense of humor, but their eyes are firmly on the prize – progressing and making the most out of oneself. They are often talented individuals, as the number of famous singers, actresses and public figures among their number indicates. Crucially, they push themselves to the limit of their ability. 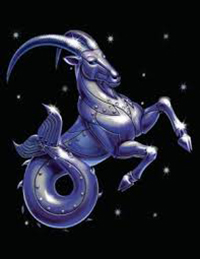 Like the goat, Capricorns can be aggressive when they need to be. They have a tendency to not shirk from confrontation, though most of the time they remain very much in control of their emotions. Theirs is a proud and strong sign, reigning high in the heavens as the coldest part of winter sweeps by.
Collective: We refer to those who are born under this sign as Capricorns.
A Positive Aspect: Sensibility is the cornerstone of being a Capricorn. These are people who have an intrinsic relationship with logic. Given a choice of solutions to a problem, they will always consider deeply, and then move towards what they believe is the best possible answer. This makes them natural leaders, and they tend to have the ability to convince others of their choice as well. It also seems that when there is a specific talent, they will stop at nothing to project and live that talent. It is a beautiful thing to observe a Capricorn in full swing.
A Negative Aspect: There are some who grow unhappy with Capricorns because of their ‘big picture’ view of the world. They find that Capricorns can be unfocussed and inattentive when it comes to emotional and personal matters. This can often cause great frustration, especially when a Capricorn remains focussed on what they believe is most important. Of course, there are many born under this sign who manage to balance these sides of their personality excellently, but it can be a struggle for many.
Famous Capricorns: Sir Isaac Newton, Elvis Presley, Martin Luther King, Shirley Bassey, Anthony Hopkins, Betty White.
Is Capricorn your sign? Do you feel you need help understanding and getting the best of your horoscope? If so, I can help you.
Always watch the Stars,
Eugenie LaCroix
Astrological Expert
Previous Post
Next Post

Horoscopes in Depth .. Capricorn This sign is so me! Just reading this I'm thinking .. yes this is me! This is how I think, act and am so true to my word! Thank you for sending this. Love reading it!

please im haveing no luck fineing a women,s love i hate being a lone is there eny hope for me yours truly mike

Would love to get more indepth look at my sign..January 5 is my birthdate

My body is more then welling to work so that I will be financial set but others don't think so I have not found work in almost 2 years. My degree has gotten me no where, so now what? Born 1-8-1950.

I find this to be very true about Capricorns and actually helpful.