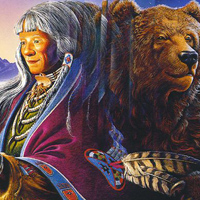 It is believed that the Native American witchcraft was connected with the religious beliefs of the people that were living in the region. Actually, you will be surprised to learn that the witchcraft and the religion if this region were similar to each other in several ways. Both of them honored and respected nature and they believed that nature was holy. The ideas and symbols used in the Native American witchcraft had been influenced by nature.

Witches not only performed magic but they also produced medicines that helped people who were suffering from different illnesses. They used different kinds of tools and techniques for the purpose of diagnosing the disease that people were suffering from. For instance, crystal rocks were used to diagnose the illnesses. There were also times when the witches recited certain sacred hymns at the time of diagnosing the illnesses. The women who served the society by helping people cure their illnesses were referred to as Shamans and they cured the sicknesses by carrying out ceremonies. Of the many ingredients that were used to help people in curing their illnesses, the witches considered the herbs to be of great importance.

The Native American witches also used to protect against the evil influences. There are many people who believe that a sacred pipe existed during that time and this tool was considered to be a significant symbol of the Native American Witchcraft. The sacred pipe was said to represent the medicine wheel and there were four directions in this wheel that were in the same space. A little tobacco was put in to this pipe and along with this; some grains were also placed in to the pipe. This sacred pipe was utilized by the witches for the purpose of lamenting.

In the past, the Native American witches believed that owls were of utmost importance and they played an important role in their witchcraft. People were believed that owl brought bad luck and if an owl was sent by a person who was considered to be a witch, then this owl could not be killed.

I am so happy I requested for this Luck Changer Candle Spell cast by the Coven - everything is so Positively changed in my favor and I am ecstatic ?? I even requested for the Weekly Spell Maintenance because I want the "positive Force" to be with me for a very very long time. Thank You my sisters in the Coven. My Blessings be with all of you. "Anonymous"

Hi I'm new to all this I wanted to no had do I get started in all this witchcraft and or herbal remedies? I am very interested!