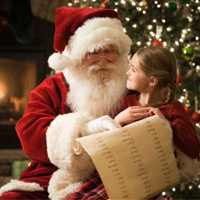 There are many different systems of belief floating around our complex world. There is no right or wrong as long as we are true to our heart’s beliefs. Today, many of you might be celebrating Christmas, and we wish you and everyone else a very happy holiday, regardless of your religious stance. As mentioned in the previous newsletter about Yule, many of the traditions of Christmas had come from the Pagan midwinter holiday. Today, we will particularize this notion by tracing the origins of the jolly gift giver we know as Santa Claus.

You probably have a picture in your head of a plump elderly man with white hair and beard in a red and white suit, flying his sleigh of reindeer with a sack of presents over his shoulder. Candidly, this image of Santa Claus has been relatively consistent throughout the course of human history. The initial evidence of the Santa Claus figure stems from the Greek and Byzantine Legend, Basil of Caesarea. Attributed with many titles such as Great Hierarch, Doctor of the Church and the Cappadocian Father, Basil was a Bishop in the 4th century A.D. renowned for his philanthropy and donating his earnings to charity. In modern day Greece, individuals exchange gifts on January 1st, Basil’s Feast Day, rather than on Christmas.

Around the same time period as Basil of Caesarea, there was another notable Greek Bishop whose charitable work had a large impact upon society. Saint Nicholas of Myra dedicated his entire life to Christianity, Charity, and gift-giving to the impoverished – you might know him better as “Jolly Old Saint Nick.” Deriving from both Saint Nicholas and Basil of Caesarea came the Dutch folkloric figure of Sinterklaas, which in the United States and Canada has become Santa Claus. From here, many different tales and attributes have been credited to Santa Claus, differing from culture to culture. Did you know that in the Netherlands, Sinterklaas is said to fly a white horse named Amerigo, rather than the original eight reindeer and Rudolph to follow. The Reindeer were not even part of Santa Claus’s legend until Clement C. Moore’s 1823 poem, “A Visit from St. Nicholas.” Though these flying creatures, Elves’ workshop, and chimney antics give Santa Claus a larger than life persona, the purpose of his actions does not actually differ much from the accounts of Basil and Nicholas. 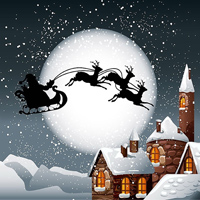 There is also a widespread belief that the figure of Santa Claus was in existence well before the spread of Christianity. There are many parallels between the Norse All-Father Odin and Santa Claus, both in appearance, personality, and actions. To cite a few examples, both have long beards, both have flying horses (or reindeer), and it was an old Asatru belief that children should leave their boots filled with carrots, straw, or sugar by the fireplace for Odin’s horse, Sleipnir, to eat. Odin would then reward those children for their kindness by replacing Sleipnir’s food with gifts or candy.

Where does the legend of Santa Claus go from here? We all play a part in the answer to this question. But why is Santa Claus important to those of us who do not practice Christianity? Because we all must learn of charity and kindness to make the world a better place.

HAPPY HOLIDAYS, MERRY CHRISTMAS, And HAPPY NEW YEAR 2016... May ALL Be Blessed, and God Bless you ALL,, with Light, Life, and LOVE...Please, Remember Me in Your Prayers, THANK YOU, Peace be with you, ALL Robert Rico..

I love Santa Claus thank you for this article