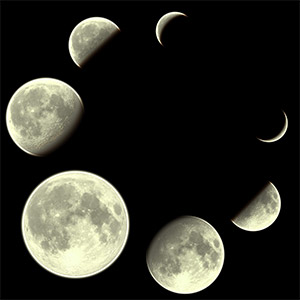 How Wiccans Use the Lunar Calendar

These Wiccan sects that use the lunar calendar do so for reasons that transcend a basic timekeeping purpose. In the faith, the moon is often attributed to Goddess, and thus plays a very important role. While the sun is a constant, remaining in the same place in the celestial sphere, the moon is constantly changing like humanity and like the seasons.

The moon is a major subject in pagan and neopagan folklore, often personified as the Goddess. Most Wiccans hold that the changing lunar phase is significant to our growth and our understanding of the Universe. For example, the new moon is the best time to begin an endeavor, whatever it may be. Then, as our perception of the moon grows larger, or waxes, so does our potential. It continues to grow until the moon becomes full, at which time it is important to reflect upon what we have done in this period of growth, and try to learn from it. Our perception of the moon then goes into decline, or wanes, as we use this time to embrace our Spirituality and prepare for the initiation of a new endeavor. Many Wiccan Rituals are associated with these lunar phases.

Many Wiccan sects have taken this idea even further, and based off of folklore and mere observations, have given the moon a distinct personality based upon the month of the lunar calendar. As opposed to lunar phases, these are called seasonal moons.

The Wiccan Moon Phases
Did you have a chance to catch the New Moon yesterday with the partial Solar Eclipse? Which moon phase is your favorite time to cast your own spells. As always, we love to hear from you, if you would like to add a comment, you can use the form below or join the conversation on our Facebook Page.
My blessings upon you,
J. Roslyn Antle
High Priestess, 7witches Coven
7witchescoven.com
Previous Post
Next Post

Thank you. That has explained why I have always found February's so difficult. Mxxx

any body thinking about getting this lucky spell my advice keep your money .for i got the double your luck one and have had nothing but bad luck since honestly i only thaught my luck was bad until i got this spell /they dont work