Posted by Monique Hargrove on 9/4/2016 to Occult Weekly
“The elements and majestic forces in nature, lightning, wind, water, fire, and frost, were regarded with awe as spiritual powers, but always second and intermediate in character.”
~Charles Eastman 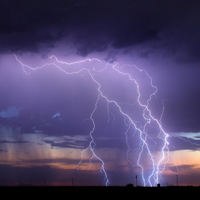 It is often easy to overlook the true magnificence of a thunderstorm. Perhaps in the days of early man, we looked to the skies and saw it torn asunder with brilliant, jagged streaks of light, followed by the deafening roars cracking across the sky. With no explanation as to how or why this sometimes happened amid the rainfall, it is no wonder that it was ultimately attributed as the domain of gods. These veritable symphonies of nature were regarded as much celestial as they were natural.
Even though science has deconstructed and explained this phenomena for us, that doesn’t, in any way, take away the power and beauty of the experience, nor does it explain the mystery as to why our sky feels the need to do it every so often.
Sages and mystics of time immemorial have never questioned the sheer power raging around in the sky during a storm. The energies that whip up in the turbulent air are so potent, so fierce, and so wild, and are naturally rife with magic. Simple conjuration might be enough to bend a small flame to your will, or to allow you to peer into the depths underneath a surface of water. It takes great energy, focus, precision, and willpower to safely harness the power of the storm. Those who attempt to channel, redirect, or manipulate the immense force put themselves at high risk, but the potential rewards are simply outstanding. A talented spellcrafter can find all manner of applications for the sheer density of energy surrounding a storm, and effective and efficient use can often amplify the energy of spells cast. The studious channeler knows to let go: Storm Magic is about relinquishing control, and allowing oneself to act as a conduit, rather than a container. Yet, if the channeler knows how to balance the act of letting go with the subtle and precise art of guiding the flow, the results are nothing short of awe-inspiring.
Even as an environmental factor, squalls so easily shape the energies of the air that they can affect even parts of the potion-making or ingredient-crafting processes of occult practices. Some Magic Oils are at their most potent when brewed during a storm. For instance, the planetary oil: Oil of Jupiter, virtually requires that the ingredients be mixed together during a storm. (Unsurprising, given Jupiter’s role in Roman Mythology). Lightning-struck wood/tree bark is a hard to find component that adds a surprising duality of grounding and wildness to potions and charms that require wood. Stormwater, in itself, tends to possess properties differing from river, stream, lake, or seawater, and tends to add a more volatile component to the tinctures and mixes. Often used as a supplement to wards, to help charge them full of the wild energy that keeps them potent for much longer periods of time.

It is an experience like no other to have the sheer might of a storm flowing through you, but should you ever attempt it, please exercise extreme caution and patience. Be wary of extraneous and incorrect information on the internet should you go searching - this is not a magic to be dallied in lightly, as while the rewards are great, one can run the risk of permanently damaging themselves.
Previous Post
Next Post

I would think that lightening struck wood would have more carbon and the water more electricity. Lightening wants to be wet. If you are on a dry rock and the water is flowing by, you are safer. On a wet rock, not so much. I did the shungite water. Just started. It has elements. I don't have a final opinion, but I expect to continue for at least 6 months. It is a little radioactive, just not a lot. So, that is to consider. As I know more, I will tell you more. I have the elite piece - small- on a pendant touching me, during the day. This was the first ime the lightening got so close to me. I can't remember if I had the pendant on, but I was on wet rocks. Wearing the pendant in the rain is to consider also. It might attract the lightening. I certainly pumped enough adrenaline. And I love the lightening and it loves me back..but that was little close.