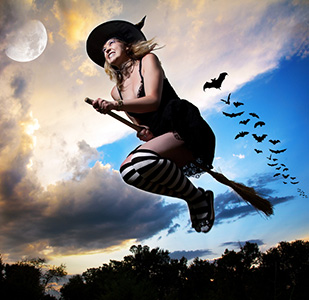 More precisely, during the Burning Times, the accusers in the Middle Ages who alleged that Witches committed multiple transgressions on a single occasion needed to validate their story. They therefore generated accounts of these Witches flying across town, or even across the country at a rapid pace. Sometimes it was said that these witches flew upon the backs of wild animals, such as a boar or a wild horse, or sometimes they did not use any medium to accomplish their Transvection. However, more commonly the Witch was said to fly on her ‘broomstick.’

Though it is unnecessary to delve too deep into the historical context of the broomstick, Practitioners in Medieval Europe were contended to mix potions and experiment with Entheogens, or natural hallucinogenic narcotics. Amongst the Europeans at the time with little knowledge of botany nor horticulture, unlike the Practitioners, an association was made between the use of unfamiliar flora and intentionally falling under the influence of these ‘drugs’ (though they were not drugs at all). In turn, these uninformed individuals made a further connection between ‘getting high’ (or the powers they achieved) and sexual intercourse, and so in their stories mentioned above, they began to report that the Witch would ride on her ‘staff’ to attain her powers. As history is written by the victors, this analogy caught on and became a staple regarding the stereotype of a Witch.

In this regards, Transvection is a falsehood, but in reality, it is an essential part of the Occult – not just experimented with by Occultists, but by Buddhist mystics, often referred to as Siddhis or Iddhis, as well by certain other spiritual groups, including a certain sect of Hindus commonly called the Flying Saints.

The idea of Transvection is not to fly across the sky, but to find a starting place to defy gravity. Most of us would think of this as simple levitation, which has been accomplished in Stage Magic (as opposed to Magick), and legend holds that a handful of others have held the power of levitation throughout human history. Even if only a millimeter off of the ground, the idea of levitation is directly associated with Astral Projection. Essentially, the Practitioner must put forth all of their efforts and energy in obtaining a certain kind of out-of-body experience (for more information see our past newsletters), that allows them if just for a moment to defy the Universal Law of gravity upon this realm, and essentially float momentarily.

The reality of levitation is subject to great debate about Occultists, but we would love to know what you think. Is it possible for a person to levitate, if only for a ‘moment’? If so, could this lead to greater forms of Transvection? Please feel free to share your thoughts on our Facebook page at: http://www.facebook.com/7witchescoven.

YES LEVITATION AND TRANSVECTION IS REAL I HAVE EXPERIENCE IT WHEN I ENCOUNTER ONE OF AMERICAN LEADER WHO DEAL WITH BOMBA TO BOMBA I FEEL DAY TIME AND NIGHT ALSO I MEET IN ASTRAL PLAIN I STILL HOLD REMAIN SECREET DUE TO MY SAFETY.