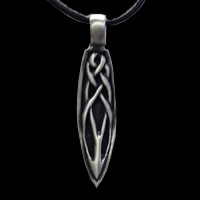 Stephenie holds the distinction of being the first person selected by High Priestess J. Roslyn Antle for participation in the 7witches Coven. This honor was bestowed upon Stephenie because of her advanced skill in a very specialized and misunderstood area of Magick the Left Hand Path.

From a very young age Stephenie developed a fascination for the occult. In particular, she was very interested in the work of Aleister Crowley. These initial studies helped Stephenie to create a unique method of Magickal practice which involves many elements that are considered to be dark in nature.

While Stephenie maintains that true Magick is neither black nor white, she concedes that the forces one chooses to invoke during Spellcasting create such designations. In the tradition of legendary occultists such as King Solomon and John Dee, Stephenie uses her abilities to command entities that would frighten many Witches. This ability is why she is such an asset to the 7witches Coven.

Stephenie has the courage and the experience to cast extremely effective hexes and curses. It is her belief that many cases justify the use of such measures. At the same time she counsels all who seek her assistance to give much thought and consideration to these actions. Spells of this nature can be reversed, but a reversal requires the combined power of the Coven. Because any karmic consequences are confined to the caster of the Spell, those who ask Stephenie to act on their behalf can do so without fear. She is very equipped to deal with such consequences.

While Stephenie has a reputation that accompanies the nature of her work, those who seek her assistance will find her to be very caring, compassionate, and good-natured.

In addition to offering all the Spells in our Standard Spells section, Stephenie Crowe specializes in Witch Hexes, Breakups, which you can find here.