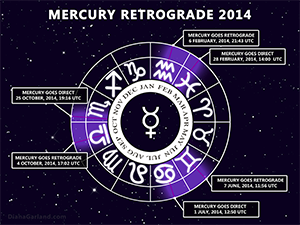 It is that time of year that sneaks up on us again, Mercury Retrograde. It is the unwelcome Uncle that stops by for an hour and stays an entire month. He rustles through our things, leaves his trail of chaos and breadcrumbs. Then before you know it just up and leaves without so much as a word. We are left to pick up the pieces of his destructive visit.

What is Mercury Retrograde? Three, and sometimes four, times a year, the planet Mercury appears to be moving backwards in the sky for a period of approximately 3 weeks. "Appears" is the key word here, because, technically speaking, no planet actually moves backwards in their orbits around the Sun. In fact, they don't even slow down. Retrograde-station-direct cycles are essentially illusions that result from our point of view from Earth, simply because the Earth is also orbiting the Sun at a different speed than the other planets. Mercury turns retrograde more frequently than any other planet. It can never be more than 28 degrees from the Sun, and whenever it reaches its furthest distance from the Sun, it changes direction.

What should you avoid during this unpredictable visit from your trickster Uncle? We have listed the top 5 things you should try and avoid during Mercury Retrograde, this will hopefully allow you to get through it mostly unscathed and with all you sanity intact.

Marriage is a contract, mind you a very sacred contract. We all know that during Mercury Retrograde signing any contract can lead have an adverse effect, so if you wish to have a long and successful marriage, try and hold off until Mercury is direct.

This is one is tricky, because if you are out of work, take the job needed. If you can however hold on those three or four weeks, do so. Starting a new job is much like a contract, and you could find yourself looking for another sooner than later, or find that if was not the original job you had accepted.

3) Do NOT Purchase a new computer:

Why you ask? This is when you'll discover that you bought the "computer from hell." You'll regret not buying the three-year warranty the salesperson suggested. And, when you install your new software, expect glitches. Hard drives fail, so make sure to back them up ahead of time.

4) Do NOT initiate new projects, launch a product, or start a new website:

You may find that you will have a higher chance of opposition; this may lead to people dropping out of the project, or to a major failure or flaw. Ultimately, if you do not want to have to go back to the drawing board, try to avoid moving forward with these plans until Mercury is direct again.

5) Try an avoid travel, if at all possible:

You may experience an unusual amount of delays during Mercury Retrograde. If you need to travel; allow yourself some extra time, secure your bags and take extra precautions. Be sure to re-confirm everything.

Mercury Retrograde is not all bad of course; it does allow us time to tie up some loose ends we have been putting off. Allow yourself not to take things too personally during this time, you will find that some people will be more dramatically effected by Mercury Retrograde and could have consequences with their communication, be patient and give them the benefit of the doubt. Take some time to clean out your closet, look up old lovers, read old journals and get a bit nostalgic! After all, it's only three weeks right?

I'm in the process of buying a house. Everything is in place but my closing date is October 8th. Do you have any advice for keeping mercury retrograde with interfering? thanks!