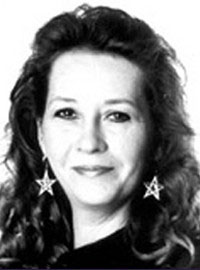 We often discuss Practitioners and other Occultists who have impacted the Craft throughout history.  We have gone as far back as the Magickal beliefs of early man, and continued to the pagan beliefs in ancient Egyptian, Greek and Roman Civilizations.  Then we passed into the Common Era and discussed the mythology in the Middle Ages, and carried on with the influence of the great clandestine Occultists during the Renaissance.  We have discussed the modern Occultist view, as popularized by Aleister Crowley, the formation of modern Wicca by Gardner in the mid-20th century, and the impact of Practitioners such as Scott Cunningham and Raymond Buckland since then.
Today our focus is on an individual who some consider to be the present spokesperson for the Craft, while others strongly object to this notion.  Her name is Silver Ravenwolf.
To give a brief history, Ravenwolf was born in 1956 as Jenine Trayer, and was introduced to neopagan thought at a very young age.  Silver first joined the Serpent Stone Family, an informal circle of Wiccans, Native Americans, and other neopagans who have historically had well-known members such as Scott Cunningham, and was initiated into the Third Degree while there.  She then left the circle to find lead the Black Forest Clan, a Coven stressing the elder European traditions surrounding the craft, as well as to commence her literary career.
In the past twenty years, Ravenwolf has written over twenty-five books in three different languages – English, Spanish, and Hungarian.  Every one of her English books have been published by Llewellyn Publications, the creation of Carl “Llewellyn” Weschcke, who as we have previously mentioned was a pioneer in the literary industry and one of the first to make Occultist knowledge available to the general public.
Silver has written books on a wide variety of topics, some fiction others quasi-non-fiction.  Her fiction works generally encompass a tale of a young witch encountering adventures along some fateful journey, probably not unlike other adolescent books you might have read.  Her non-fiction works concern many Occultist topics, including Spellcasting, recipes, Rituals, paganism in Ancient Europe, how to make a Book of Shadows, and the Runes.  Because of these books, not only the content but the intended readers, Silver Ravenwolf has become a polarizing figure in Wicca and other neopagan circles.
To begin, Ravenwolf derogates religions outside of the Craft in nearly all of her non-fiction books.  As we have mentioned, and is indeed accurate history, the spread of Christianity did directly correlate to the decline of paganism, primarily due to threats, persecution, and undue influence.  Ravenwolf directly addresses this history of European hostility in her books, but then associates these historical acts with the ideology of modern Christianity itself.  As we have discussed previously, and most Wiccans believe, an individual has the inherent right to choose any religion to follow, so long as it helps them find wisdom and peace.  Wicca is just another Path to Spirituality most suitable for some, and by no means is in opposition to any other religion.
Further, some literary critics knowledgeable of the Occult argue that much of the 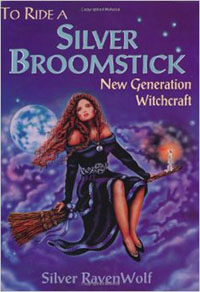 information that Ravenwolf provides is simply incorrect and this information that she conveys is directed toward pre-teenagers, encouraging them to adopt neopaganism as their Faith.  Again, most Wiccans believe in non-interference with an individual’s right to choose their Path, and therefore any sort of propaganda campaign promoting Wicca contradicts the foundation of Spirituality.  Finally, and similarly, Silver Ravenwolf has described Spellcasting as ‘easy’, ‘fun’, and capable of making your dreams come true.  For all of us true Practitioners, we know that Casting is certainly not easy and produces no absolute certainty even in perfect conditions.
Nonetheless, Ravenwolf has gained quite a following in recent years, and the younger generation of Wiccans seem to be following her lead.  Do you think it to be positive that we have such a strong promoter of neopagan thought?  Or do you think that this goes against the Wiccan belief?
Previous Post
Next Post

This is a very enlightening article on a gem like Silver Ravenwolf.

I believe that Silver RavenWolf's believes go against Wiccan belief. I think her believes would be a bit dangerous.

I've been reading her for some years now. I feel Raven is attempting to bring back the "FUN" energy of the practice not to say it should be approached as if it's a game, but to remind/teach folks that it's the LOVE of what we do that makes it successful, not all the "pomp and pony shows" that's going around in the west about basically all practices (i.e. folks in search of power without working on themselves, looking at the craft like someone off television, etc.). I applaud Raven for her efforts!!! ASE!!!

Greetings Silver. I have read many of your more popular books, and have enjoyed all of them. I use the Gardnerian path and have been practicing for around 4 years. My wife and I have joined a coven, about 3 hours drive away, so we wish to have circles here at home. But our home circles are awkward most of the time. The wife is getting somewhat discouraged with the home circles, but still loves the coven. Do you know of any books that spells out what the ritual should be, from start to finish, for a first degree initiate? BB Henry

I really like the books that Silver Ravenwolf publishes. She is very wise and I trust her wisdom on the craft.

I think it's positive because someone has to take the initiative to make sure the different areas of each craft continues on and enter into the right hands of guardianship and protection. All things in life has a positive and a negative therefore no one person is completely wrong depending on their view and reason.

I think we can describe to others about the craft how ever we choose to but we should be honest in what we know and teach. If Ravenwolf wants to appeal to teens then she can write in her books to attract them. It is capable of of making dreams come true if you believe and not doubt your spell work.

Everyone has their path and journey..Personally it's not for myself and her energy nor writings do I assocaite with..I don't see my practice of my craft as fun and exciting..I personally believe everything begins with intention and energy you carry..I don't look to recruiter others to be a witch..I am a witch not one who out to use words to get what I want nor live in the world of charmed .Witches know that and take accountability for all actions ...Everything is balance and everything we bring forth with thought word to create action..Witches know you don't cast with out first clearing your own energy with balance..Our Craft isn't dabbling it's very serious and not from. the mind but soul..Being a witch isn't what we do its who we are and our life! BB