Witchcraft and the Summer of Love

On this groovy, far out Thursday afternoon, we are going to hop into our time machine and take a walk down memory lane – back to the Summer of Love.

The 1960s was a controversial time, but one of the most significant throughout history. The international arena was divided between the allies of the Western World and the communist regimes in Eastern Europe and Asia, and wars were breaking out because of it. The technology that we are dependent upon today was taking its modern shape. Man had gone to space and stepped on the moon. And the music scene was happening.

Specifically in 1967, people that others generally refer to as ‘hippies,’ or ‘flower children’ because of their open-mindedness, alternative cultural preferences, and peaceful ways, were gathering in the Haight-Ashbury neighborhood of San Francisco, in what became known as the Summer of Love. Hundreds of thousands of young individuals joined together, lived communally, and shared their resources and experiences with one another in one of the most harmonious and congruent few months of human history. They simply listened to music, planted seeds in their garden, helped one another out – and took a lot of hallucinogenic drugs. 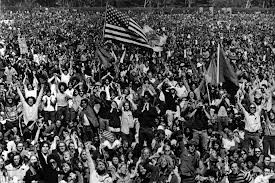 Amongst these individuals, who generally did not have a strong opinion on any given religion, were several experimental Occultists – but not your average Practitioner. One of the most famous of these, regarded at one point by United States President Richard Nixon as the most dangerous man in the world, was Timothy Leary.

Leary was born into a strict Irish-Catholic family, and rebelled against the institution as a young man. A gifted chemist, Leary then turned his attention to the experimentation of the drugs LSD and Psilocybin Mushrooms. Consistent with Occultist ideology, Leary believed that these drugs could wholly change an individual’s mindset and expand their thinking process. At one point, Leary was commissioned by Harvard University to experiment on prison inmates to determine whether these drugs could change their antisocial or violent behavior, as well as on divinity students to determine whether these drugs could induce them to have spiritual revelations. The results of these studies lead Leary amongst others to believe that hallucinogenic drugs could lead to a positive collective mindset, and were thus used (perhaps excessively), during the Summer of Love when the flower children were looking for nothing more than peace and a good time. However, because Leary took the drug scene too far, providing them to many individuals before, during, and after the Summer of Love, and encouraging protests, his legacy is more one encompassing criminality that Occultism.

At Harvard, Leary worked with one Richard Alpert, better known as Ram Dass. While Dass also engaged in these studies on prisoners and divinity students, he was more spiritual, not seeking to fight to prove that his and Leary’s philosophy was correct, but rather to help individuals on their path to spirituality and become more satisfied with their life. It is true that he worked with and encouraged the use of hallucinogenic drugs, he incorporated these in his Occultist search for the Divine. He traveled to India to study Hinduism, and started many charitable foundations promoting the spiritual well-being of society.

There were many other individuals aside from Leary and Dass who played a significant part in the alternative thinking during the Summer of Love. Some in fact were direct proponents of the Craft and sought to teach it to those around them. But it important to mention these two individuals, not because we consider the promotion of LSD and Psilocybin narcotics to be positive for society as a whole, but simply to illustrate a different way to try and find truth.

This has some very interesting stuff in it!! I love reading about things well that aren't in the history books that they decided we needed yo study during school! Thanks

This is the time that o should have lived .wood stock & all the love and flower power just seem like I've been here before