Buddhism: The Darker Side 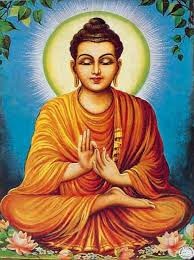 Many of you might be familiar with the story of how Siddhartha Gautama became what we know today as the first Buddha. Though there is a great deal of uncertainty surrounding the life of Siddhartha Gautama, the general consensus is that he was born around the 5th Century B.C.E. in what is present-day Nepal. Gautama was born into a wealthy family (most say that he was a prince); married a young woman named Yasodhara and had a baby boy with her who they named Rahula. Though he had this loving family, and any material possessions he could desire, in his late 20's Gautama ventured to meet the villagers of his kingdom.

Upon this journey, Siddhartha encountered many impoverished rustics, including a man with a dehabilitating disease, an actual corpse just lying on the ground, and an ascetic, or an individual who was wholly separated him or herself from any worldly pleasures. Gautama was sickened by what he saw on this visit, and sought to change his ways. He left his family, his kingdom, and all of his possessions behind and transformed himself into an ascetic, begging for alms in the street.

By living this sort of frugal lifestyle, Gautama believed that he could shed himself of all desires for possessions and fear of worldly thoughts – in other words to find Enlightment. He succeeded. Gautama discovered what is referred to as the 'Middle Way', essentially a compromise between complete selfishness and self-hatred.

Following this discovery comes the part of this legend that seems to be the most widely known – when Siddhartha Gautama became the first Buddha. In a state of weakness, Gautama walked to and sat beneath a Pipal tree, known now as the Bodhi tree. Gautama mediated and vowed not to awaken until he had reached a state of truth. Low and behold, nearly fifty days later when the stars had aligned and the moon was full Gautama, now the Buddha awakened. He had claimed to attain this true state, now called Nirvana or Enlightment, and claimed to have discovered the Four Noble Truths – the reason for suffering and the way to absolve it.

Regardless of whether Buddhism is considered an organized religion or an individualized Path to Spirituality, it has significantly grown since Buddha's awakening, and remains one of the largest and oldest religions to this day. Some scholars of Buddhism claim that Gautama's story represents the individual's goal in following the Middle Way to find what they are looking for. That is, if an individual is able to find a compromise between love for material possessions and self-deprivation, they will find peace. To the contrary, others believe that the unitary lesson message of the Buddha's story is to attain Nirvana.

Some of those who believe that attaining Nirvana is the sole purpose of Buddhism have taken extraordinary measures to achieve this goal. Perhaps you have heard of Vajrayana, better known as Tantric Buddhism. This form of the Faith itself is over 1500 years old, teaches individual followers to perform rituals in order to attain Nirvana, and thus become Buddha and free themselves of the life cycle as fast as possible. This often involves self-inflicted wounds and submissive intercourse.

While the ritualistic methods vary from group to group, there is another dark side of Buddhism beyond this. Some Buddhist monasteries are said to function more like slave plantations than places of prayer. The teacher generally has full control over his disciples, and will often discriminate against women and other races, believing that they cannot attain Nirvana. Further, there is even a Buddhist army called that Sohei, still present in Japan.

What do you think? Join the discussion: So given the story of Buddha, and his journey to find peace and relieve human suffering, do you think that some of these Buddhist customs mentioned above taint the spiritual nature of this Path to Spirituality? Why or why not? Let us know what you think! Please feel free to share your thoughts on our Facebook page or Follow us on Twitter.